On my ride home from work today I heard this piece on NPR.  It turns out that Walt Disney Company is attempting to re-brand Mickey Mouse to the next generation–by making him the protagonist of a video game.

Mickey Mouse and his nemesis, Oswald the Lucky Rabbit?

In “Epic Mickey,” Disney’s flagship cartoon character is sent to  “Wasteland,” the purgatory for all Disney characters that are destined for the cutting room floor–an “Island of Misfit Toys” for Disney graphic designers’ wayward whims, if you will.

In creating “Epic Mickey,” not only is Disney attempting to reintroduce Mickey to a market that long since stopped caring about him; they are taking the bold, hilarious and downright mischievous step of digging up every character, idea and design that did not “make the cut” and inserting it into the plotline of the video game.

Enter: Oswald the Lucky Rabbit.  Disney aficionados apparently are aware that in the mid 20’s Walt Disney created his first character, Oswald the Lucky Rabbit.  A short time after creating this character, Disney lost the rights to Oswald during a contract dispute, opening the door for the accidental cartoon sensation of the 20th century…Mickey Mouse.

Why do I care about this?

The question “How should we roll this out?” is, I’m sure, an intensely scrutinized question in any marketing process, whether it be a new flavor of Gatorade or a new face in Disney’s panoply of characters.

What does it tell us that Disney is using the video game industry to rebrand Mickey, resurrect Oswald, and bring to light dozens (if not hundreds) of shadowy cartoon characters?

Rebrand Mickey?  Sounds reasonable.  After all, kids today go to Disneyworld.  However, who on Earth but Disney devotees and people well into their 90’s (remember, the last time Oswald was heard from was 1928.  Anyone capable of remembering such a character had to be of at least Junior High age) has even heard of Oswald the Lucky Rabbit?  And when was the last time one of them picked up a Wii?

The first time a recording artist premiered her album on iTunes rather than with a CD release party, she unwittingly signaled the death knell for hard copy music sales.  CD’s are still walking around post-mortem, but it’s only because Luddites like myself don’t like the fact that mp3’s don’t come with jewel cases that shatter if you look at them crossly.

I engaged in active denial until now, but I resign myself to the suspicion that much like mp3’s, video games will become the one of the central vehicles for pop culture, and since education often tries to imitate pop culture, we will soon be teaching using video games.  It makes perfect sense.  They’re engaging, interactive, require investment of time and money.  Just the things marketers and educators look for in an audience.  Of course, I’m not the first person to suggest this.

What company in its right mind would plunk the millions of R&D dollars into educational video games.  As McGraw Hill discovered, textbooks don’t pay nearly as well as pay-to-play bond rating publications (sorry Moody’s, but you drew first blood).

However, like Jeff Goldblum said in Jurassic Park, “life finds a way.”  I think “life” will find a way to bring educational video gaming to the marketplace, and I think I know what it will look like. 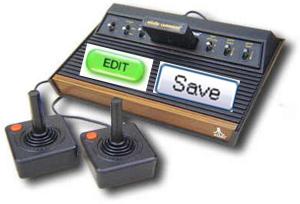 No one born after 1978 will have any idea what that reference means.  No bother.  I anticipate (nay drool with anticipation for) the first simplified markup language platform in which students and teachers may collaboratively build the universe, storyboards, characters, objectives, and conclusions, all tailored to student learning goals.  Rather than becoming quasi-literate in programming code, users will use “wikitext” to create worlds in which creation is the product of learning, and vice versa.

If such a thing already exists, I’m going to be embarrassed.  Please contact me so that I can rescind this post.  Then send me the link to this wiki-game-editing device.  I want to get in on the ground floor of “Pong, Spanish Edition.”

View all posts by tsadtler